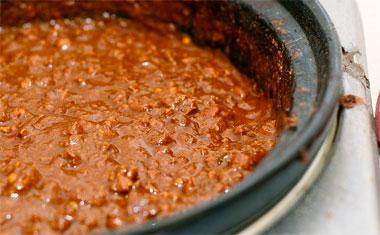 "Texas Red" chili; photo by Jamiepatra on Flickr
Chili has been the Official State Dish of Texas since 1977.

Ben Z . Grant, Marshall, Texas, convinced his colleagues in the 65th Texas Legislature that chili was the only dish worthy of representing the state in an official capacity.

Chili became the official state dish of Texas when Governor Dolph Briscoe signed House Concurrent Resolution No. 18 (HCR 18) on May 11, 1977.

CASI urges everyone to preserve its status and respect the words of House Concurrent Resolution #18 which reads:

Texas H.C.R. No. 18
HOUSE CONCURRENT RESOLUTION
​     WHEREAS, One cannot be a true son or daughter of this state without having his taste buds tingle at the thought of the treat that is real, honest-to-goodness, pure, unadulterated Texas chili; and

WHEREAS, Texans continue today the tradition begun in San Antonio over 140 years ago of making the best and only authentic concoction of this piquant delicacy; and

WHEREAS, President Lyndon B. Johnson commented that “Chili concocted outside of Texas is a weak, apologetic imitation of the real thing,” and Will Rogers described Texas chili as “the bowl of blessedness’; and

WHEREAS, Texas has been the site of the annual International Chili Cook-off since 1967 and is the home of the 1976 World Champion Chili Cooker, Albert Agnor, or Marshall; and

WHEREAS, It is customary for the legislature to designate certain state emblems in recognition of this state’s great heritage and rich resources; and

WHEREAS, The beauty of Texas trees and flowers is represented by the pecan and bluebonnet and the mockingbird is emblematic of our abundant and varied wild life, but the internationally esteemed cuisine of this great state has received no official recognition and has no official symbol; now, therefore, be it

RESOLVED by the House of Representatives of the State of Texas, the Senate concurring, That the 65th Legislature, in recognition of the fact that the only real “bowl of red” is that prepared by Texans, hereby proclaims chili as the “State Dish of Texas.”